Home / News / The music of the spheres 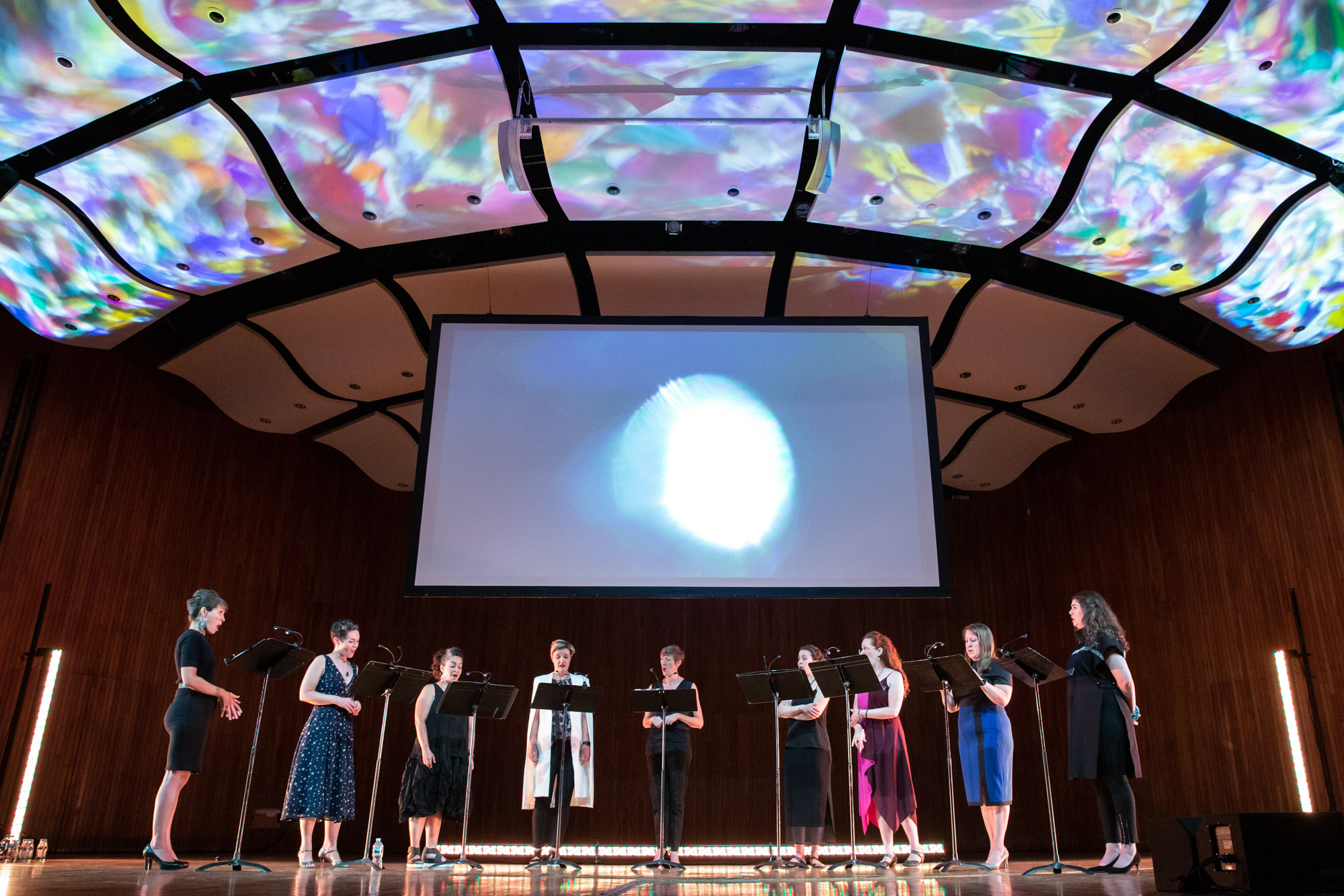 The music of the spheres

From Arts at MIT article by Ken Shulman

Get more information on current art collaborations with TESS at MIT at tess.mit.edu/arts

Space has long fascinated poets, physicists, astronomers, and sci-fi writers. Musicians too have often found beauty and meaning in the skies above. On July 30, at MIT’s Kresge Auditorium, a group of composers and musicians rendered visions from space in a concert titled Songs from Extrasolar Spaces. Featuring Boston’s Lorelei Ensemble—a Boston-based women’s choir—the concert included premieres by MIT composers John Harbison and Elena Ruehr, along with compositions by Meredith Monk and Molly Herron. All the music is inspired by discoveries in astronomy.

Songs from Extrasolar Spaces was part of an MIT conference on TESS—the Transiting Exoplanet Survey Satellite. Launched in April 2018, TESS is an MIT-led NASA mission that scans the skies for evidence of exoplanets: bodies ranging from dwarf planets to giant planets  that orbit stars other than our sun. During its two-year mission, TESS and its four highly-sensitive cameras survey 85% of the sky, monitoring more than 200,000 stars for the temporary dips in brightness that might signal a transit—the passage of a planetary body across that star.

“There is a feeling you get when you look at these images from TESS,” says Ruehr, an award-winning MIT faculty member and former Guggenheim Fellow. “A sense of vastness, of infinity. This is the sensation I tried to capture and transpose into vocal music.”

Supported by the MIT Center for Art, Science & Technology’s Fay Chandler Creativity Grant, MIT Music and Theater Arts, and by aerospace and technology giant Northrop Grumman, which also built the TESS satellite, the concert was the brainchild of MIT Research Associate, Natalia Guerrero. Both the concert and the conference marked the 50th anniversary of the Apollo 11 moon landing–another milestone in the quest to chart the universe and Earth’s place in it.

A 2014 MIT graduate, Guerrero manages the team finding planet candidates in the TESS images at the MIT Kavli Institute for Astrophysics and Space Research and is also the lead for the MIT branch of the mission’s communications team. “I wanted to design an event that could make the TESS mission accessible to people who aren’t astronomers or physicists,” says Guerrero. “But I also wanted that same event to inspire astronomers and physicists to look at their work in a new way.”

Guerrero majored in physics and creative writing at MIT, and after graduating, she deejayed a radio show called “Voice Box” on the MIT radio station WMBR. That transmission showcased contemporary vocal music and exposed her to composers, including Harbison and Ruehr. Last year, in early summer, Guerrero contacted Ruehr to gauge her interest in composing music for a still hypothetical concert that might complement the 2019 TESS conference.

Ruehr was keen on the idea. She was also a perfect fit for the project. The composer had often drawn inspiration from visual images and other art forms for her music. “Sky Above Clouds,” an orchestral piece she composed in 1989, is inspired by the Georgia O’Keefe paintings she viewed as a child at the Art Institute of Chicago. Ruehr had also created music inspired by David Mitchell’s visionary novel “Cloud Atlas,” and Anne Patchett’s “Bel Canto.” “It’s a question of reinterpreting language, capturing its rhythms and volumes and channeling them into music,” says Ruehr. “The source language can be fiction, or painting, or in this case these dazzling images of the universe.”

In addition, Ruehr had long been fascinated by space and stars. “My father was a mathematician who studied fast Fourier transform analysis,” says Ruehr, who is currently composing an opera set in space. “As a young girl, I’d listen to him talking about infinity with his colleagues on the telephone. I would imagine my father existing in infinity, on the edge of space.”

Drawing inspiration from the images TESS beams back to Earth, Ruehr composed two pieces for Songs from Extrasolar Spaces. The first, titled “Not from the Stars,” takes its name and lyrics from a Shakespeare sonnet. For the second, “Exoplanets,” Ruehr used a text that Guerrero extrapolated from the titles of the first group of scientific papers published from TESS data. “I’m used to working from images,” explains Ruehr. “First, I study them. Then, I sit down at the piano and try to create a single sound that captures their essence and resonance. Then, I start playing with that sound.”

Ruehr was particularly pleased to compose music about space for the Lorelei Ensemble. “There’s a certain quality in a women’s choir, especially the Lorelei Ensemble, that is perfectly suited for this project,” says Ruehr. “They have an ethereal sound and wonderful harmonic structures that make us feel as if we’re perceiving a small dab of brightness in an envelope of darkness.”

At the 2019 MIT TESS conference, experts from across the globe shared results from the first year of observation in the sky above the Southern Hemisphere, and discussed plans for the second year trek above the Northern Hemisphere. The projections for the concert incorporated series of images from different parts of the sky TESS observed in its first year; morphing between twinkling pixels and terrestrial dapples of light. The visualizations were a collaborative effort, between Guerrero; Zach Berta-Thompson, professor at University of Colorado, Boulder and former MIT Torres Fellow; and visual artist, Maria Guerrero.

The composers and musicians hope Songs from Extrasolar Spaces, which invited the public to engage with the TESS mission, offered a new perspective on space exploration, and perhaps will spark further collaborations between scientists and artists. George Ricker, TESS Principal Investigator; Sara Seager, TESS Deputy Director of Science; and Natalia Guerrero, TESS TOI Manager, presented a pre-concert lecture. “Music has the power to generate incredibly powerful emotions,” says Ruehr. “So do these images from TESS. In many ways, they are more beautiful than any stars we might ever imagine.”

TESS is a NASA Astrophysics Explorer mission led and operated by MIT in Cambridge, Massachusetts, and managed by Goddard. Additional partners include Northrop Grumman, based in Falls Church, Virginia; NASA’s Ames Research Center in California’s Silicon Valley; the Harvard-Smithsonian Center for Astrophysics in Cambridge, Massachusetts; MIT Lincoln Laboratory; and the Space Telescope Science Institute in Baltimore. More than a dozen universities, research institutes, and observatories worldwide are participants in the mission.

Get more information on current art collaborations with TESS at MIT at tess.mit.edu/arts