The primary goal of the TESS Follow-up Observing Program (TFOP) Working Group (WG) is to provide follow-up observations that will facilitate achievement of the Level One Science Requirement to measure masses for 50 transiting planets smaller than 4 Earth radii. A secondary goal of the TFOP WG is to foster communication and coordination both within the TESS Science Team and with the community at large in order to minimize wasteful duplication of observations and analysis. We operate under the guiding principle that efficient use of limited resources and increased opportunity for collaboration should improve the quality and quantity of scientific output. Although the primary focus of the TFOP WG is to achieve the Level One Science Requirements, any science coming out of TESS can also be served.

The TESS Objects of Interest (TOIs) will be followed up with imaging, reconnaissance spectroscopy, and precise Doppler Spectroscopy.

The TFOP Working Group is run by Dave Latham and is separated into 5 subgroups:

Much of the work of the TFOP WG falls into five general areas of functionality, each of which will have its own Sub Group (SG).

SG1: Seeing-limited Photometry to identify false positives due to nearby eclipsing binaries that contaminate the TESS image of a candidate transiting planet. Provide better inventory and better photometry of scene than is provided by the TIC. For some cases, provide improved light curves, ephemerides, and/or measure transit timing variations (TTVs).

SG2: Recon Spectroscopy to provide spectroscopic parameters that will more precisely constrain the masses and radii of planet host stars, to detect false positives caused by spectroscopic binaries, and to identify stars unsuitable for precise RV measurements, such as rapid rotators.

SG3: High-resolution Imaging with adaptive optics, speckle imaging, and/or lucky imaging to detect nearby objects that are not resolved in the TESS Input Catalog or by Seeing-limited Photometry.

SG4: Precise Radial Velocity Work with the goal of deriving orbits for the planet(s) orbiting the host star for the determination of planetary mass(es) relative to the host star.

SG5: Space-based Photometry with facilities such as HST, Spitzer, MOST, CHEOPS, and JWST, primarily to confirm and/or improve the photometric ephemerides provided by TESS, but also to provide improved light curves for transit events or even TTVs in some cases.

Starting in 2021, ESA’s Gaia mission shares with NASA’s TESS mission information about unpublished Gaia photometry of TOIs and their nearby stars, taking advantage of Gaia’s much higher angular resolution to identify false positives due to nearby eclipsing binaries and in many cases to confirm that the transits detected by TESS are on the announced host star.

Application for membership in the TFOP Working Group

To learn more about the TFOP WG application, click here. 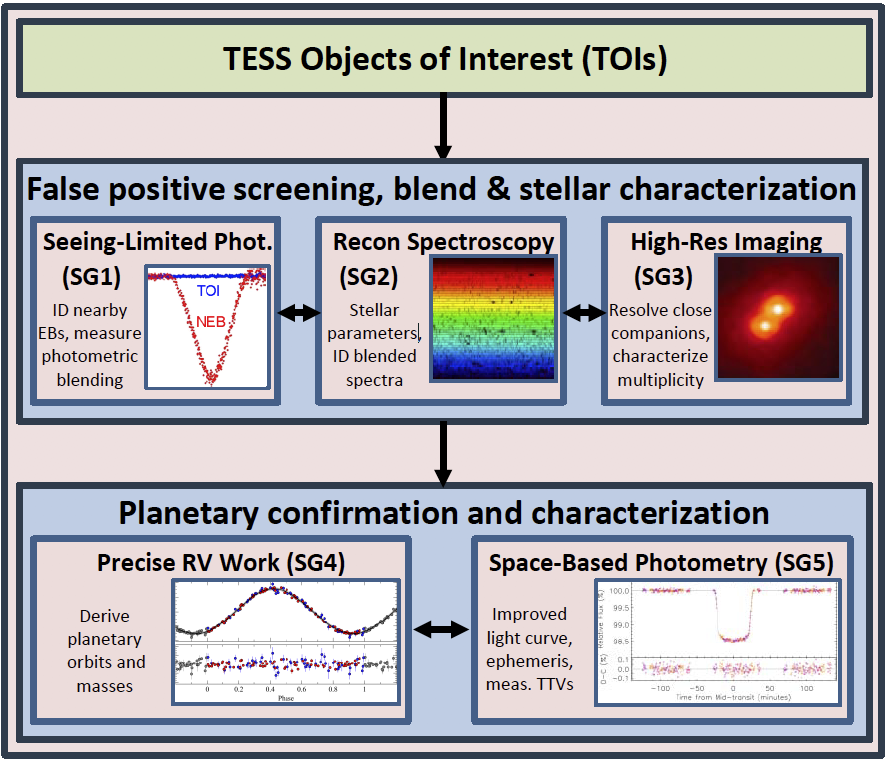 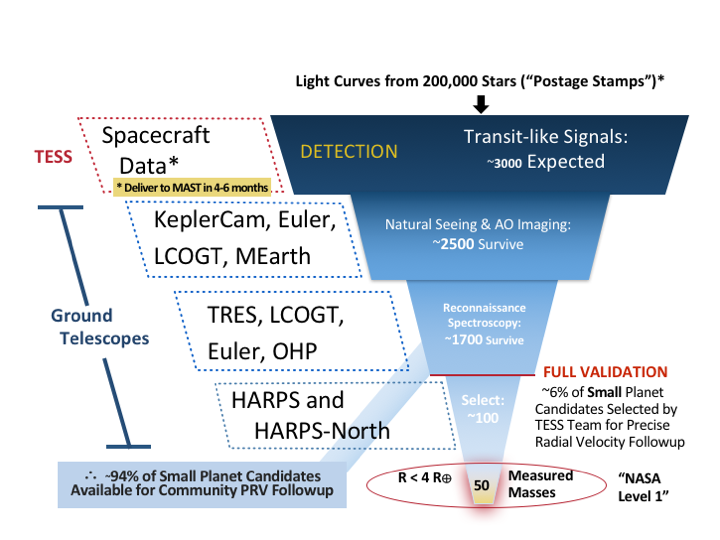 Above Graphic: Small Planet Validation and Mass Measurements Process: Achieving a Baseline Science Requirement of measuring the masses of fifty planets with radii less than 4 REARTH.