The Atmospheric Characterization Working Group (ACWG) for NASA’s TESS mission was initially envisioned to conduct pre-launch activities for maximizing TESS’s impact on exoplanet atmosphere studies. Now that TESS is in the heart of its prime mission with an extended mission forthcoming, the ACWG is entering into a new phase of its work. Going forward, the role of the ACWG is to ensure the successful legacy of the TESS mission, specifically as it relates to the atmospheric characterization of its discovered exoplanets. In this context, success means pursuing a goal that the TESS-discovered exoplanets be observed by an optimal set of ground- based and spaced-based facilities in a coordinated manner, so as to extract population-level and individual planets’ atmospheric properties.

Apply to Join the ACWG

If you wish to join the ACWG, please read our Charter and then fill out the application form below:

The ACWG is maintaining a list of all known exoplanets with measured masses that meet the ACWG Level 1 priority flag for their high anticipated signal-to-noise. This list of planets is further broken down in the plots below to give the targets with the highest TSM (Transmission Spectroscopy Metric; Kempton et al., 2018) values in prescribed bins of radius and equilibrium temperature. Our goal is to motivate systematic statistical surveys of exoplanet atmospheres. In the future, we plan to provide an interactive tool for generating these plots, allowing the user to define their own survey grid and apply their own cuts (e.g. by properties such as TSM, brightness etc). 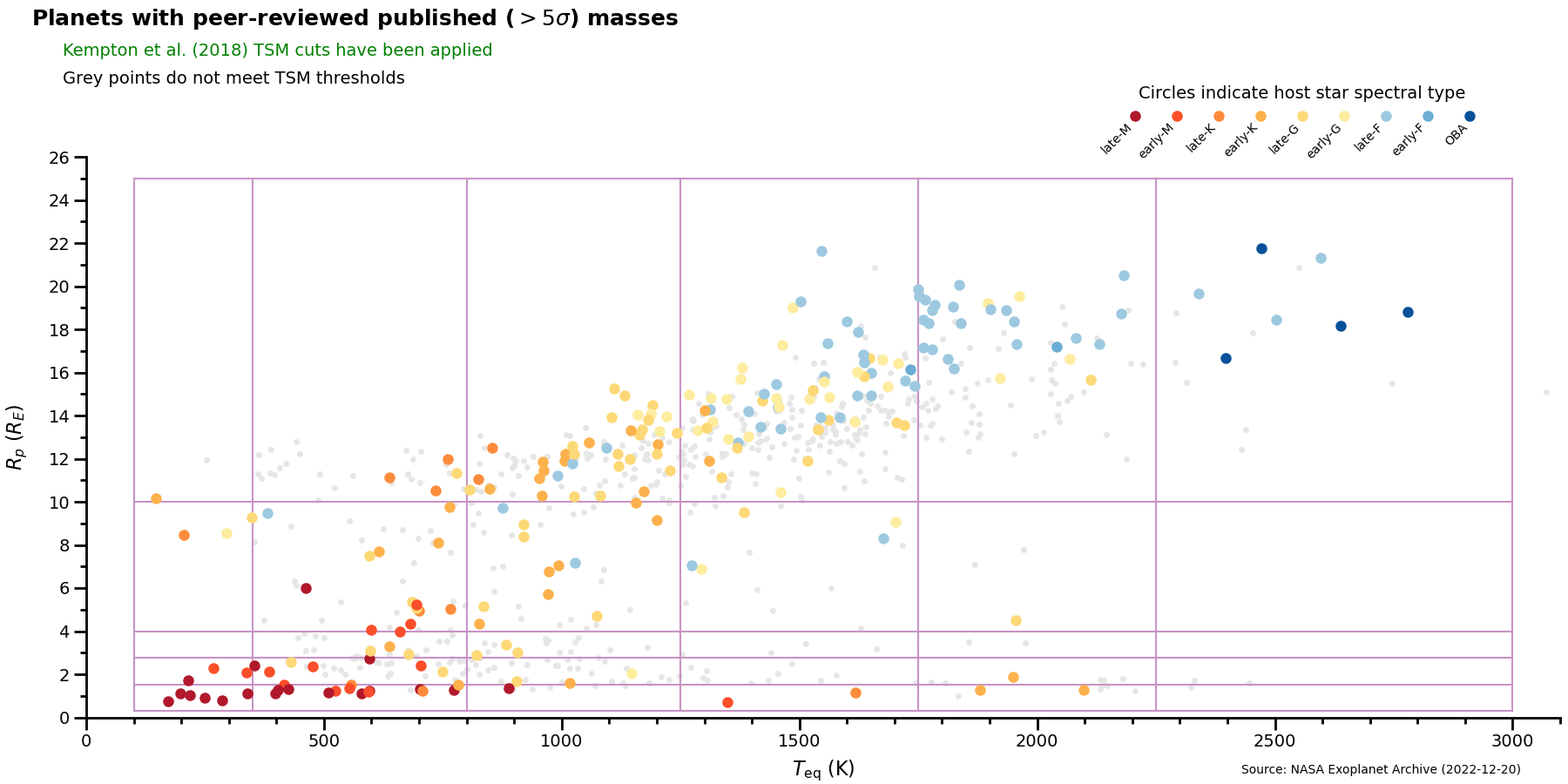 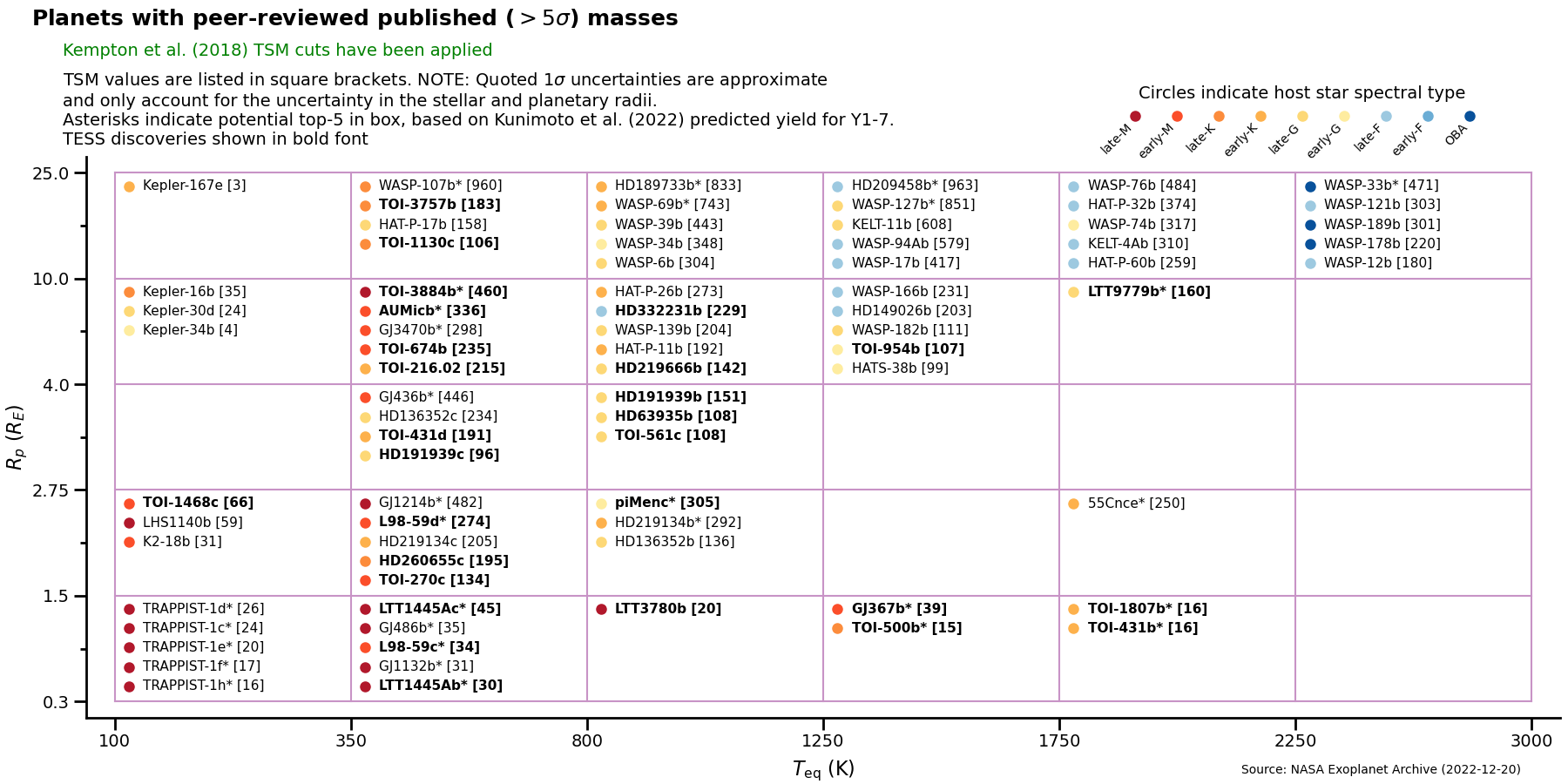 The two plots above show confirmed planets with robust (>5-sigma) mass measurements as recorded on the NASA Exoplanet Archive. For the scatter plot, planets with TSM values exceeding the thresholds given in Figure 2 of Kempton et al. (2018) are color-coded by the spectral type of the host star. Other confirmed planets with robust (>5-sigma) mass measurements but lower TSM values are plotted in the background as grey points. For the grid plot, planets exceeding the Kempton et al. (2018) thresholds are listed, ranked by TSM values, with up to 5 planets listed per grid cell. The TSM values are reported in square brackets beside each target.

Here is a similar grid plot, but for confirmed planets with highly-ranked ESM values: 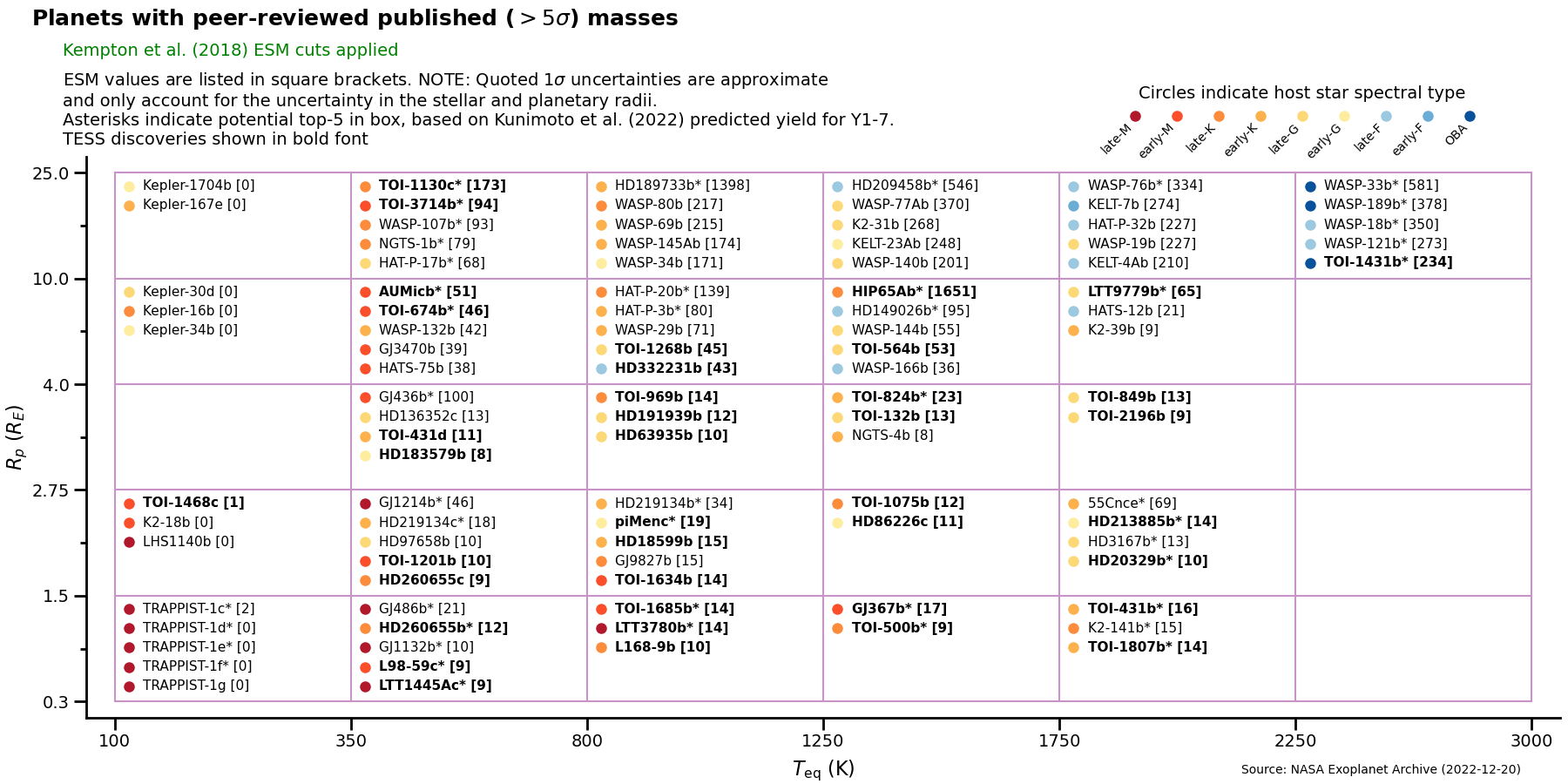 Here are spreadsheets for the confirmed planets listed above: transmission and emission.

The two figures below show the same grid with TOIs from the NASA Exoplanet Archive ranked by their TSM and ESM values, date-stamped (YYYY/MM/DD) in the lower right corner. We plan to update this figure on a monthly basis as new TOIs are released and hope that it will provide guidance for the TFOP community by highlighting TOIs with the most promise for subsequent atmospheric characterization measurements.

Transmission spectroscopy:  as a spreadsheet (including further properties and comments for each TOI) 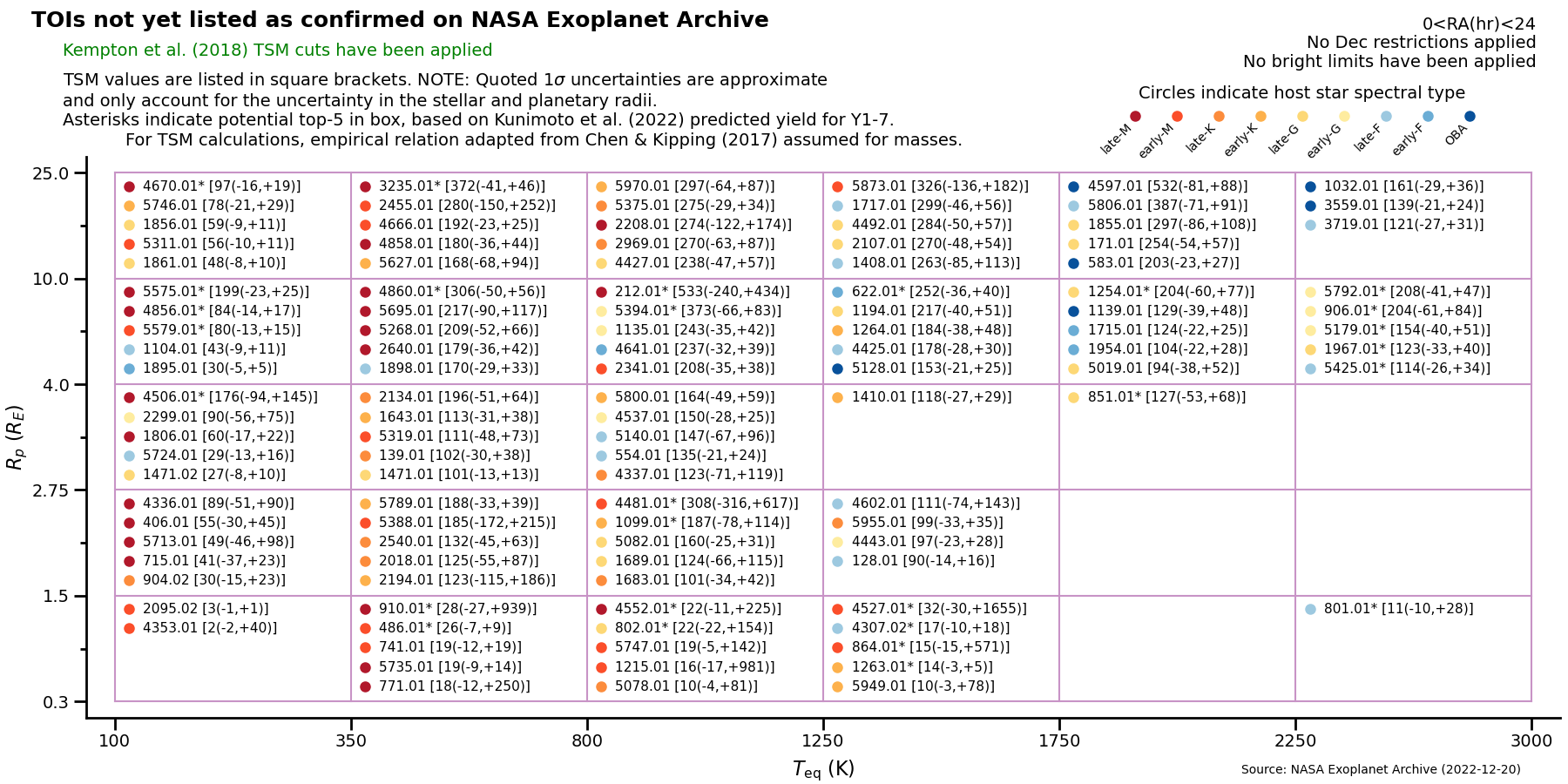 Emission spectroscopy: as a spreadsheet (including further properties and comments for each TOI) 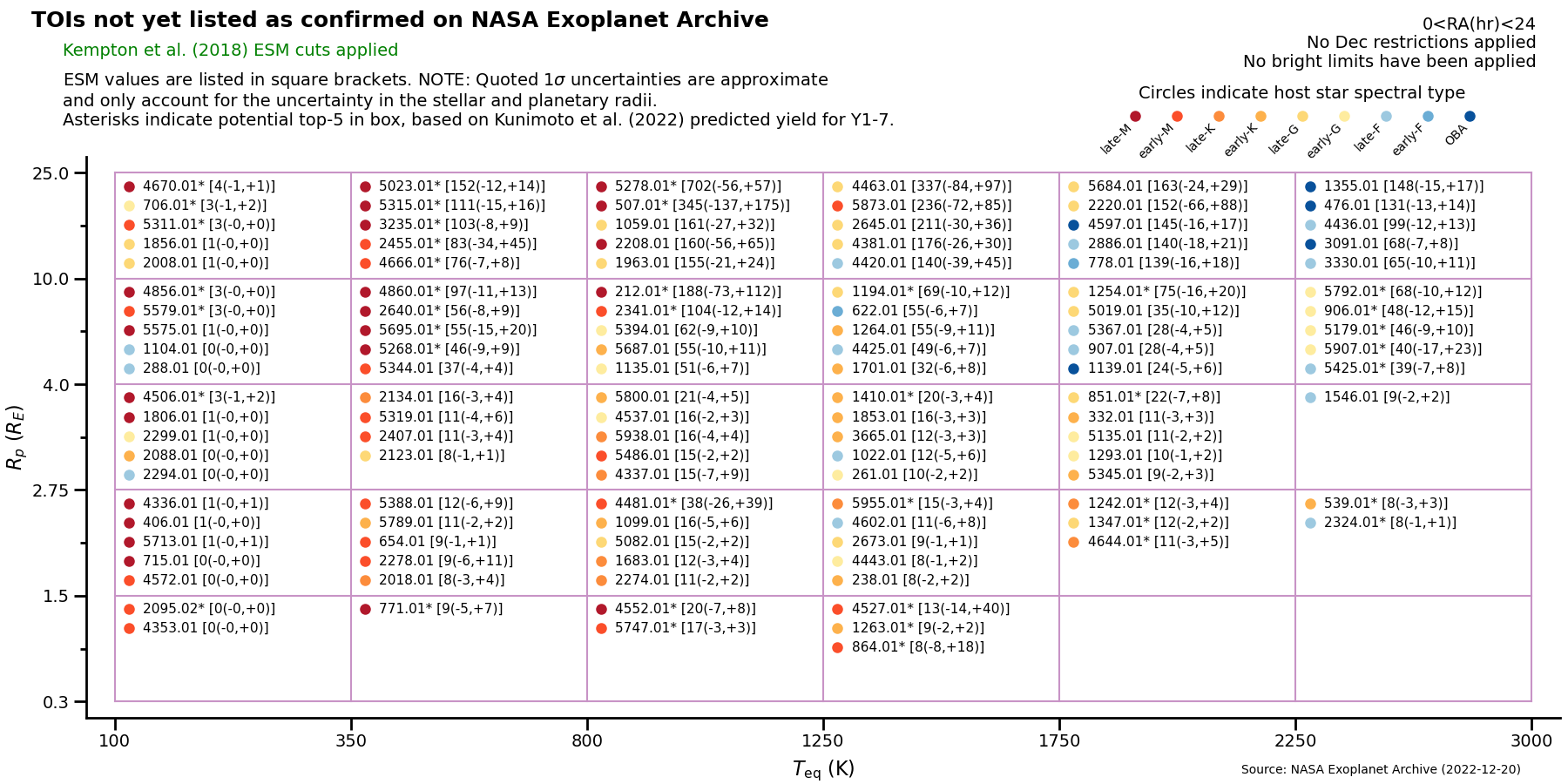 Note that all TOIs listed above have TFOPWG disposition “PC” for “planet candidate”. TOIs with other classifications have been excluded, namely: “APC” for “ambiguous planet candidate” and “CP” for “confirmed planet”.

Numbers in square brackets give estimated TSM/ESM values (see below for assumptions). For the TSMs, a minimum threshold of TSM>50 has been adopted for planets with radii >1.5 R_Earth. This is more relaxed than the threshold of TSM>90 adopted for the confirmed planets above. The reasoning here is that we would like to provide a healthy sample of proposed targets to the TFOP community. Furthermore, given the inherent scatter in the underlying mass distribution, we do not want to be too restrictive on the basis of TSMs computed from a deterministic mass-radius relation. For smaller planets, however, the same minimum threshold of TSM>10 has been adopted for both confirmed planets and TOIs.

Transmission spectroscopy: as a spreadsheet (including further properties for each planet) 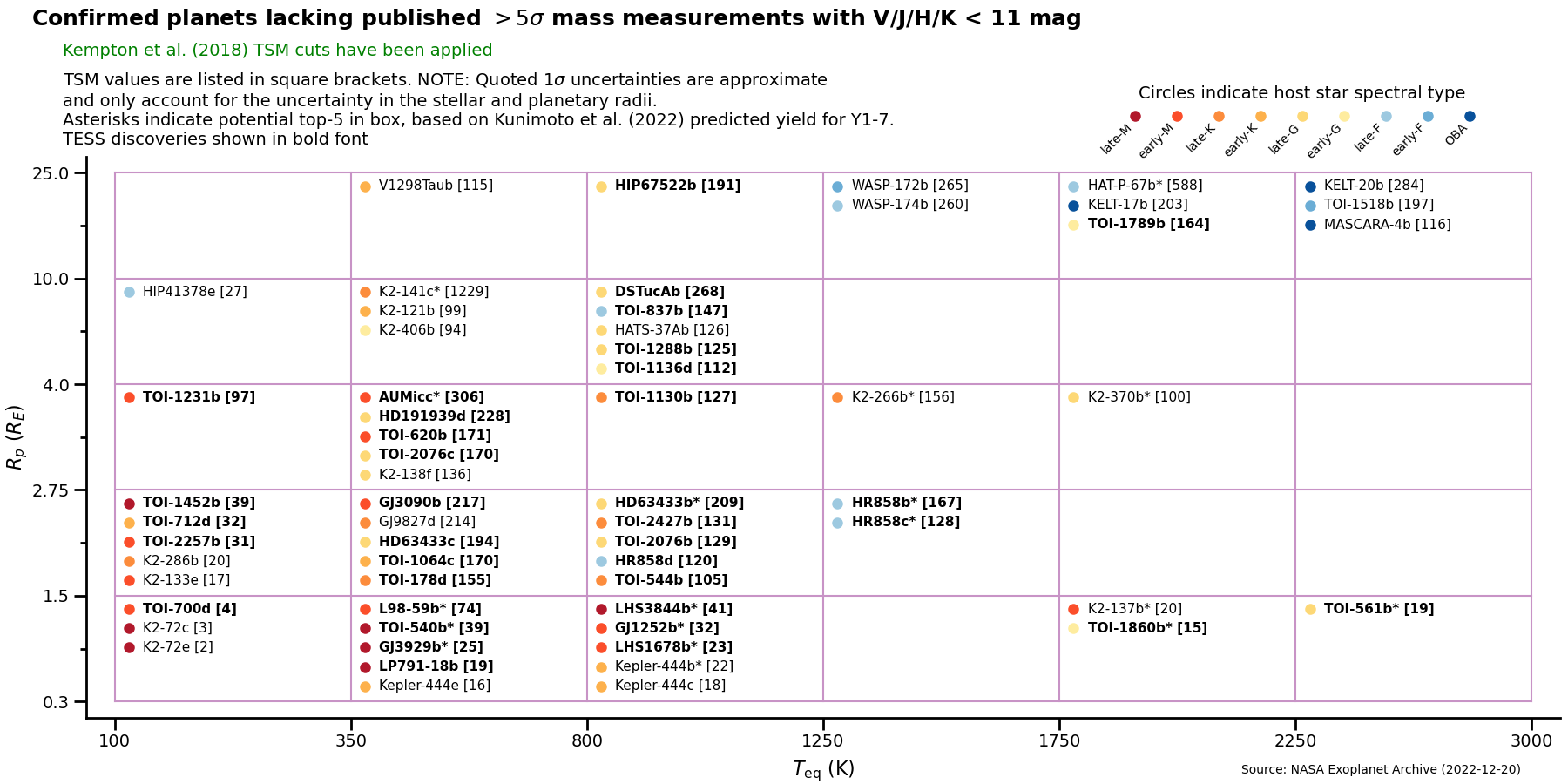 Emission spectroscopy: as a spreadsheet (including further properties for each planet) 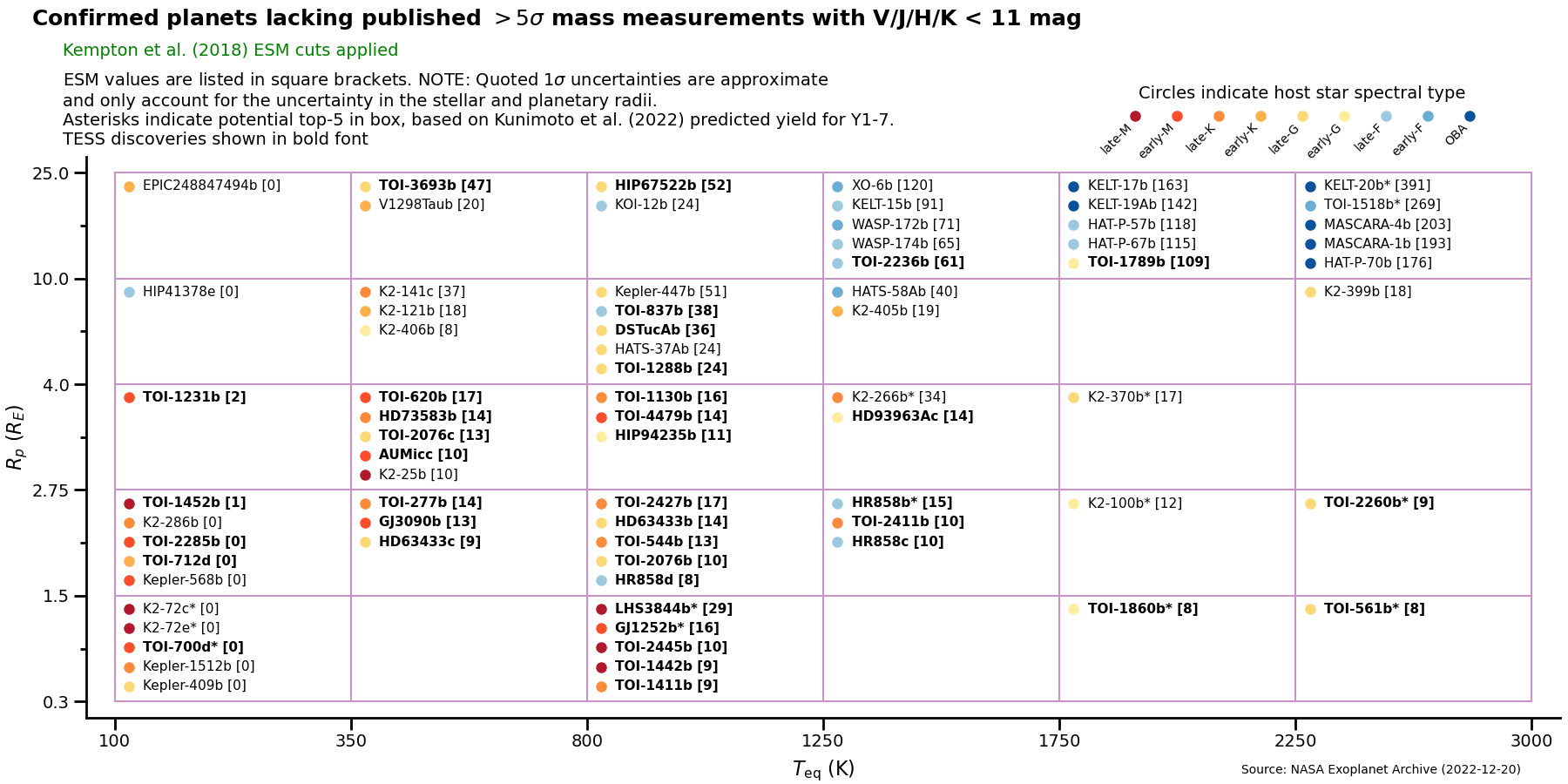 It is worth stressing that in order to calculate the TSM values listed above for targets lacking mass measurements (e.g. the TOIs), a deterministic mass-radius relation was assumed, which was adapted from the mean of the Chen & Kipping (2017) empirically-derived distribution. It is shown by the black line in the following figure, along with the population of planets that have measured masses. The scatter in the true distribution of masses is clearly evident in this figure. As such, the TSM predictions given above are only offered as a rough guide for prioritizing follow-up observations.

This is a work in progress and we’d welcome community input. Feel free to contact Thomas Mikal-Evans (tmevans [at] mpia.de), Eliza Kempton (ekempton [at] astro.umd.edu), or any other member of the TESS ACWG with feedback or suggestions.


The TESS ACWG maintains the following spreadsheet of approved JWST transiting planet observations as a community resource. While we do our best to keep this information up-to-date, the table below is not guaranteed to be free of errors. We therefore encourage you to double-check any critical information against the appropriate STScI web resources. You may also report any errors to Bjorn Benneke (bbenneke [at] astro.umontreal.ca) or Eliza Kempton (ekempton [at] astro.umd.edu).